Shedding Light on Laser Tech – Why PicoWay Makes Our Day

Shedding Light on Laser Tech – Why PicoWay Makes Our Day

PicoWay™ is a current laser tattoo removal procedure, which produces the most satisfactory outcome. It’s intended to be performed by licensed professionals at certified establishments.

Getting inked is painful enough, but a botched laser tattoo removal could make anyone gasp in horror. In our more than 10 years of practice as a  clinic, we’ve seen the scars and burns for ourselves and have heard plenty of horror stories.

Now that you’ve outgrown that tattoo, or find that it no longer fits your lifestyle, you’re probably tempted to make a beeline for the nearest clinic to get rid of it. Before you do, however, it would be smart to educate yourself on the procedure and its effects.

In this article, you’ll learn:

Here at The Aesthetics Centre, we’ve made use of available technology and proven that not all tattoo removal machines are created equal. Faced with so many choices, your main concern should be finding treatment that is safe, efficient, and reliable.

Read more:
What to Expect After Laser Tattoo Removal

For removing tattoos, as well as treating acne scars and uneven skin pigmentation, our patients find that the PicoWay laser procedure produced the most satisfactory effect. We provide this kind of treatment using the FDA-approved PicoWay™ device marketed by Candela™.

In tattoo removal, the objective is to break down the tattoo ink pigment into the smallest possible particles. PicoWay is known to have the fastest operating laser at 300ps on the 785nm wavelength. The speed of the laser is what generates a photoacoustic shockwave.

This photoacoustic energy is what shatters the pigments into very tiny fragments. The more miniscule the particle, the easier it is to remove and the faster it is for the body to eliminate through natural processes.

The PicoWay procedure acts below the surface of the skin and typically involves a series of sessions. It works across a broad range of skin types, depending on the wavelength required for your treatment.

The laser is delivered onto the skin at a trillionth of a second or what’s called a picosecond. At the rapid speed at which light is beamed onto the area, there’s not enough time for the skin to absorb the heat and damage to the surrounding tissue is avoided.

To gauge the effectiveness of different laser tattoo removal machines, you need to digest the concept of pulse duration. Picosecond is a measure of time wherein 1,000ps is equivalent to 1 nanosecond and 1ns is a billionth of a second. The lower the number, the faster the laser.

Will it hurt?
6 Answers to FAQs About Tattoo Removal Pain (and What Can Be Done About It) 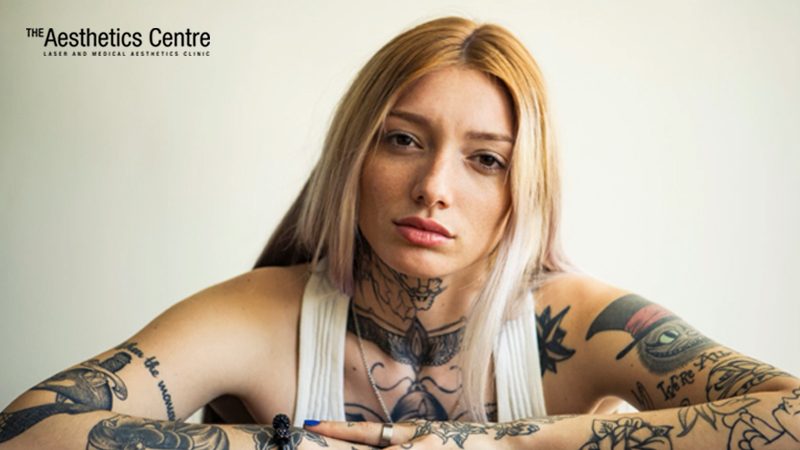 2.   About Q-switched and Nanotech Lasers

Before picosecond lasers came to the fore, the industry was dominated by Q-switched lasers and lasers that runon nanosecond technology. Both are used to direct pulsating light on the targeted area to shatter pigmentation into miniscule particles, but at different speeds and wavelengths.

Q-switched lasers deliver energy at a speed of a millionth of a second. Remember what we said earlier about pulse duration? Again, the faster the speed with which light is beamed onto the tattoo, the more effective and safe it is.

With Q-switched lasers, your skin is exposed to lasers  for a longer period of time, generating heat along the way, but breaking up the ink more slowly. In some instances, this process could result in blistering, scarring, and discolouration.

What Happens After Tattoo Removal? Find Out Here.

3.   Why PicoWay is preferred over PicoSure

Prior to PicoWay, Cynosure’s PicoSure was widely used by dermatologists. PicoSure was initially marketed as having similar specifications and benefits to PicoWay.

However, the fine print will tell you that PicoSure has a lower wavelength of 755nm, which is converted to 532nm and 1064nm settings using laser handpieces.

This conversion process causes the energy to drop, which compromises the wavelength’s potency or efficaciousness. It operates at 750ps and relies mainly on heat to remove pigmentation.

The device uses a titanium sapphire laser, which allows for the optimum removal of a wide range of tattoo colors and skin pigmentation.

The ultra-short 785nm wavelength in a PicoWay laser is currently unparalleled in the aesthetics market. Thanks to its multiple wavelengths, it is also capable of treating a wider spectrum of colours. Given that  the picosecond pulses produce less heat energy, the procedure is more comfortable and the recovery time is faster compared to others.

We may have different reasons for getting rid of our ink, but we all want a safe and smooth removal process. When it comes to tattoo removal machines, PicoWay delivers results that are a step above the performance of other lasers.

Despite its higher cost, PicoWay will prove to be a good investment as you reap the long term benefits of a fast, smooth and effective tattoo removal process. Ask us about PicoWay Laser Services now!