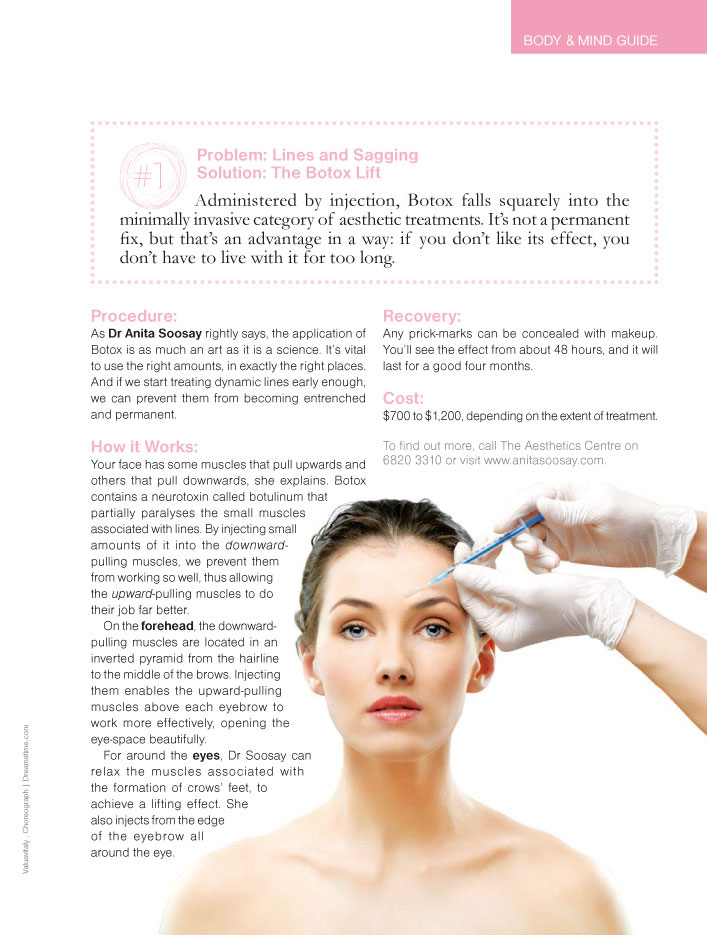 Administered  by injection, Botox falls squarely into the minimally invasive category of aesthetic treatments. It’s not a permanent fix, but that’s an advantage in a way: if you don’t like its effect, you don’t have to live with it for too long.

As Dr Anita Soosay rightly says, the application of Botox is as much an art as it is a science. It’s vital to use the right amounts, in exactly the right places. And if we start treating dynamic lines early enough, we can prevent them from becoming entrenched and permanent.

Your face has some muscles that pull upwards and others that pull downwards, she explains. Botox contains a neurotoxin called botulinum that partially paralyses the small muscles associated with lines. By injecting small amounts of it into the downward-pulling muscles, we prevent them from working so well, thus allowing the upward-pulling muscles to do their job far better.

For around the eyes, Dr Soosay can relax the muscles associated with the formation of crow’s feet, to achieve a lifting effect. She also injects from the edge of the eyebrow all around the eye.

Any prick-marks can be concealed with makeup. You’ll see the effect from about 48 hours, and it will last for a good four months.

To find out more, call The Aesthetics Centre on +65 6820 3308 or visit theaestheticscentre.com