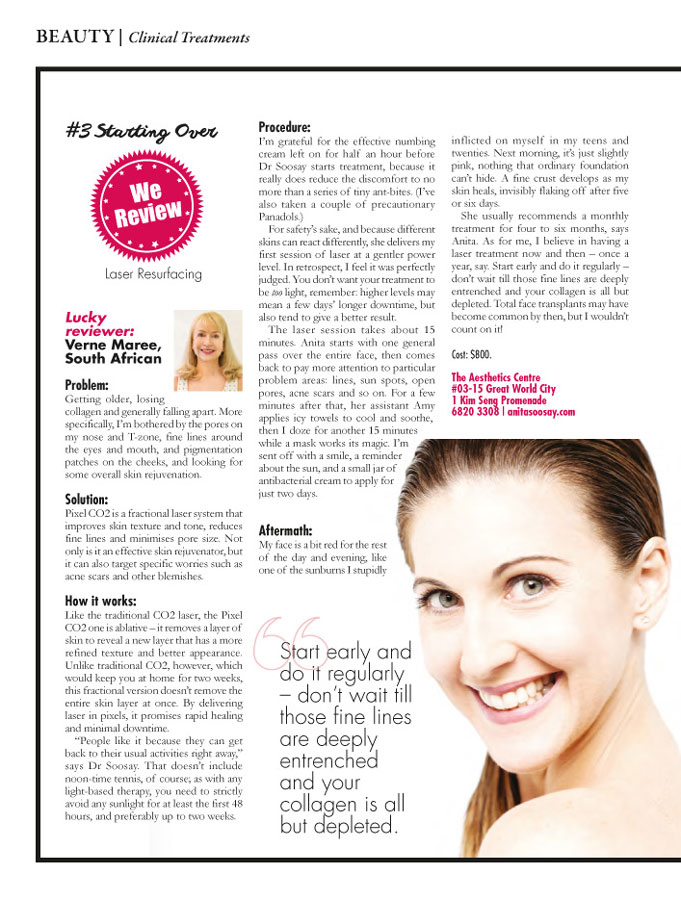 Getting older, losing collagen and generally falling apart. More specifically, I’m bothered by the pores on my nose and T-Zone, fine lines around the eyes and mouth, and pigmentation patches on the cheeks, and looking for some overall skin rejuvenation.

Pixel CO2 is a fractional laser system that improves skin texture and tone, reduces fine lines and minimises pore size. Not only is it an effective skin rejuvenator, but it can also target specific worries such as acne scars and other blemishes.

Like the traditional CO2 laser, the Pixel CO2 one is ablative – it removes a layer of skin to reveal a new layer that has a more refined texture and better appearance. Unlike traditional CO2, however, which would keep you at home for two weeks, this fractional version doesn’t remove the entire skin layer at once. By delivering laser in pixels, it promises rapid healing and minimal downtime.

“People like it because they can get back to their usual activities right away,” says Dr Soosay. That doesn’t include noon-time tennis, of course, as with any light-based therapy, you need to strictly avoid any sunlight for at least the first 48 hours, and preferably up to two weeks.

I’m grateful for the effective numbing cream left on for half an hour before Dr Soosay starts treatment, because it really does reduce the discomfort to no more than a series of tiny ant-bites. (I’ve also taken a couple of precautionary Panadols.)

For safety’s sake, and because different skins can react differently, she delivers my first session of laser at gentler power level. In retrospect, I feel it was perfectly judged. You don’t want your treatment to be too light, remember: higher levels may mean a few days longer downtime, but also tend to give a better result.

The laser session takes about 15 minutes. Anita starts with one general pass over the entire face, then comes back to pay more attention to particular problem areas: lines, sun spots, open pores, acne scars and so on. For a few minutes after that, her assistant Amy applies icy towels to cool and soothe, then I doze for another 15 minutes while a mask works its magic. I’m sent off with a smile, a reminder about the sun, and a small jar of antibacterial cream to apply for just two days.

My face is a bit red for the rest of the day and evening, like one of the sunburns I stupidly inflicted on myself in my teens and twenties. Next morning, it’s just slightly pink, nothing that ordinary foundation can’t hide. A fine crust develops as my skin heals, invisibly flaking off after five or six days.

Start early and do it regularly – don’t wait till those fine lines are deeply entrenched and your collagen is all but depleted.

She usually recommends a monthly treatment for four to six months, say Anita. As for me, I believe in having a laser treatment now and then – once a year, say. Start early and do it regularly – don’t wait till those fine lines are deeply entrenched and your collagen is all but depleted. Total face transplants may have become common by then, but I wouldn’t count on it!